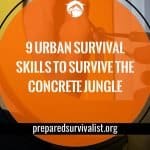 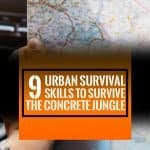 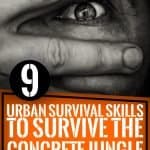 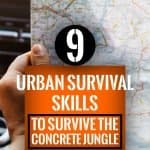 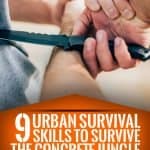 While they take up a small portion of the land, Major cities in the US still house 80% of the population. This means that there is a very high probability that you will be caught in a city when disaster strikes. Urban survival becomes very important because of this.

The skills needed to survive the concrete jungle are of course very different from any bushcrafting skills that most of the peppers and survivalist are used to.

But to be prepared to survive in the city in case of a disaster, I’ll let you in on 9 urban survival skills that you need to have provided by our friends at urbansurvivalsite.com

The trademark of big cities is lots of buildings, and lots of buildings means lots of locks. In normal circumstances, these locks may be an afterthought. However, in a disaster scenario, being able to get past them could mean the difference between life and death.

Brush up on your lockpicking skills and invest in a good, portable lockpicking kit. In the right situation, these things could prove incredibly valuable.

How do you hide in a place where there are thousands if not millions of eyes everywhere you turn? The answer is that you hide in plain sight. The art of blending in is one that is really underappreciated, however, in an urban area it is often the best way to ensure you are not the target of whatever catastrophe is taking place.

Martial law officials, foreign invaders, desperate scavengers, and more are all more likely to target someone who catches their attention for any reason at all. In these scenarios, it’s best to be just another indistinguishable face in the crowd.

If you don’t intend to carry a weapon on you during your visit to the city, it’s a great idea to have a few self-defense skills that you can rely on. Of course, in the vein of blending in, physical confrontations should be avoided if at all possible.

If you do have to defend yourself, though – for whatever reason – you need to make sure that you have what it takes to come out on top.

One great thing about urban areas is that there is no shortage of materials and suppliesavailable if you know where to look and you have an eye for making use of the unordinary. Scavenging is more of a mindset than it is a skill that is taught.

You just need to keep your eyes open and develop a bit of creative talent for repurposing what you find into something useful. Here are some places to scavenge for supplies after the SHTF.

When you’re surrounded by people, there’s often a lot to take in and process. This is especially true in hectic situations such as after a disaster. With that said, developing an acute situational awareness and the ability to quickly take in everything going on around you is one of the best ways to ensure your survival in an urban area.

This starts with really tuning in your focus to your surroundings and trusting your instincts above all else. In many cases, this type of situational awareness can help you escape dangerous situations before they ever develop.

Too many people are completely reliant on their GPS when it comes to navigating an urban area. However, if those GPSs ever stop working, there are going to be a lot of people who are lost and in trouble.

To avoid being one of them, take the time to learn the area you are visiting and get comfortable with the idea of navigating it without any technological aid.

Buy a map that you can bring with you and memorize a few escape routes just in case you lose it. If things go south, these navigation skills could be the difference between getting out quickly and getting caught wandering around a maze of concrete and steel.

The middle of a major riot in an urban area is not a place you want to be under any circumstance. Just think back to the LA riots for an example of how dangerous these riots can become and how quickly they can spiral out of control.

Of course, escaping a riot isn’t nearly as simple as walking away. If it were, there would be far fewer innocent bystanders who died in the chaos.

Before you visit a major city, take the time to research the best way to escape a riot in case you are caught up in one. There’s a lot of great information out there about this designed to help you get out of the middle of a riot as quickly as possible.

Urban areas mean lots of people, and knowing how to deal with people when necessary is an important survival skill. If you can develop a knack for communicating with people, talking them down from violent situations, and reading their intentions based on what they do and say, you’ll have a much easier time navigating the often complex and sometimes dangerous human interactions that take place after a disaster has struck.

If you think driving through a big city under normal circumstances is a nightmare, imagine what it would be like to drive through one during or immediately after a major disaster. Of course, many times driving anywhere in these scenarios won’t be a possibility; in a situation where everyone is trying to get out, traffic jams can quickly shut the entire road system in the city down.

However, if you get out early enough or if there’s been time for the dust to settle, you may be able to effectively escape the city via your vehicle – assuming of course that you have the driving skills necessary to navigate a major city during heavy traffic congestion and highly stressful situations.

It’s certainly no easy feat but, like anything else, it can be learned.

Be sure to learn each urban survival skill on this page to have the highest chance of surviving an urban disaster. The most important in my opinion being situational aware in any situation.

You can read the full post over at urbansurvivalsite.com