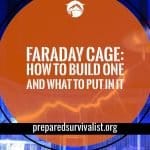 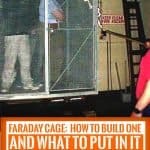 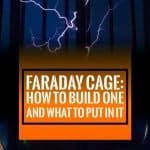 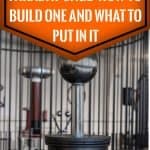 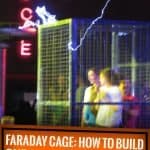 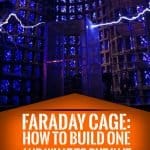 When we think about prepping, we usually think about the romanticised situations that movies are made around.

You might think about a massive earthquake, military invasion, or even a zombie apocalypse.

However, I bet you don’t sit around thinking about a solar flare or electro-magnetic pulse very often. It’s odd that preppers don’t usually consider those situations because they’re actually very realistic, and they’re very dangerous.

To make it worse, they can accompany those romanticized situations that we all like to daydream about.

That makes a difficult situation even harder to get through. That’s why I want you to know how to make a Faraday cage.

They’re fairly simple, and they can help if you ever find yourself in a situation where electro-magnetic fields are a threat.

What Is A Faraday Cage?

Electro-magnetic pulses and really powerful solar flares can temporarily disable electronics, or they can entirely destroy them.

As a society, we are heavily dependent on electronics.

So, even if there isn’t a large-scale survival situation taking place, an EMP can cause one to start very quickly. In some instances, they can even be outright deadly. That’s where a Faraday cage comes in.

It’s essentially a shield that stops electro-magnetic waves in their tracks.

A Faraday cage is typically made from metal wires or plates, and it redirects electrical charges away from whatever is inside of the cage.

Why You Should Get A Faraday Cage

If you simply read the examples I’ve provided so far, it may seem as if you don’t have a use for a Faraday cage unless you work in a field that requires it.

That’s not true, though.

They can help the average person prevent very common threats, and they can help you get prepared for less common survival situations.

An electro-magnetic pulse attack may seem like something out of a Tom Clancy novel, but the threat is very real.

The U.S. has ignored the possibility of an EMP attack, and that has left us vulnerable.

In fact, a single EMP attack can theoretically wipe out our entire power grid.

If that happens, you’ll be left without any form of electronic communication, and any life-saving electronic tools you have will be destroyed.

You’ll also lose all of your precious memories because your HDD drives will be destroyed.

If you put those items in a Faraday cage, you won’t have to worry about them as much.

While it isn’t something you’d prepare for in case of a disaster, It’s a good idea to start using it before any major disaster happens and electronics and society as we know it still exists.

Most cards that you hold with you in your wallet have RFID chips in them.

While RFID crimes aren’t as common as other forms of credit fraud, it is still possible for someone to walk by you with a scanner and steal your information.

That’s why using a RFID wallet is a good idea.

The wallet is essentially a mini faraday cage that prevents criminals form stealing your information.

Protecting against cellphone tracking probably seems like I’m crossing into the land of paranoid delusion, but it’s a real threat for some people, and a Faraday cage can protect against it.

Our phones all have cameras and microphones nowadays, and they’re fairly easy for hackers to break into.

If you’re the type of person to worry about that type of thing, you’ll be happy to know that you can use a Faraday cage to prevent it from happening to you.

Our own sun can destroy our electrical system.

If a massive solar flare or solar storm took place today, it would wipe out our power grid with ease, and we’d essentially be sent back to the stone age for a period of time.

The use of Faraday cages can preserve our most crucial devices.

How To Build A Faraday Cage

Building a Faraday cage is fairly simple, and you probably have most of the necessary materials sitting around your house.

The first method I know of only requires a stapler, metal meshing, and some wood pieces.

You’ll wan’t to cut a length of wood into 8-inch strips.

You’ll wan’t to cut five of them, and you won’t want them to be too thick.

I suggest making them 1-inch thick.

Start out by stapling one of the braces to the far end of the mesh length-wise.

To finish it up, just staple the last brace to the other end, and fold it all into the shape of a small rectangle. That design creates a very small Faraday cage.

If you need something bigger, you can just increase the size of the materials a bit.

The same construction method will work regardless of how large you want your cage to be.

The second method you can use at home is even easier, and it only requires a galvanized bucket, aluminum tape, and a smaller rubber bucket.

To make it, all you have to do is tape over all of the seams inside of the bucket with the aluminum tape.

Jam the rubber bucket inside, and slap the lid on.

It takes less than five minutes to do, and it works pretty well. You do need to make sure that you tape over all of the seams, though.

That includes the areas where the handles connect to the bucket.

You’ll want to use aluminum foil for your faraday cage.

Using finer mesh will give you better performance at higher frequencies.

What Should You Store In A Faraday Cage?

Now that you have a Faraday cage, you might be wondering what you should actually use it for.

I’ve compiled a list of the most important prepping items to put inside of a Faraday cage, and I’ve separated the list into two sections.

Communication devices such as cellphones are great additions to a Faraday cage. The cage will prevent people from spying on you with them, and it’ll protect all of your data if an EMP attack happens. The phone systems might all go down the drain, but our phones have tons of other functions that are useful for survival.

A pocket radio isn’t as good as a hand-cranked solar radio, but it’ll help while your on the move, and it’s a good way to know what’s going on in the world.

Hand-cranked radios are far superior to pocket radios, but they’re larger and less mobile. I highly suggest throwing one of these in your Faraday cage encase of an emergency.

Ham radios are going to be your main way of communicating with the outside world during an emergency. Phone lines will be down, and you won’t have many other options. It’s important to keep a good ham radio protected at all times.

Walkie-talkies may not help you establish contact with the outside world, but they’ll help you communicate with your family and friends when you’re forced to temporarily separate.

Flashlights and tactical flashlights are crucial during survival, and they’re easily damaged by EMP attacks. Keep several spares in your Faraday cage.

Headlamps can technically go in the flashlight section, but their ability to give you hands-free light makes them special, and they’re one of the first light sources you should pack away in your Faraday cage.

Right now, hunting is only truly necessary for rural citizens. Everyone else pretty much does it as a hobby or tradition. In a survival situation, that could change drastically. Hunting can become a necessity for all people, and any gear that helps with that can make your life a lot easier in the future. For that reason, I suggest putting your trail cameras and other hunting electronics into a Faraday cage.

Some sort of rechargeable battery is a necessary part of every prepper’s kit, and they’re susceptible to EMPs. I recommend throwing a few rechargeable batteries in your cage, and you should also invest in a solar charger to keep them charged when the power goes out.

I’ve talked about survival watches in the past. If you read that article, you’ll know that I think everyone should own one. However, the one you wear everyday is going to be susceptible to EMP damage. For that reason, I recommend putting a spare in your cage.

Two items should be carried on your body every single day.

I suggest storing a Faraday cage in your car for a few items, too.

There are some myths that surround Faraday cages, and I want to take this time to bust those myths.

Like most myths, the internet tends to have a lot of false information about these, and I don’t want anyone getting the wrong idea about their new prep device.

You can test a faraday cage with your phone

A lot of people believe that they can test their Faraday device by putting their cellphone in it, and calling their phone from another phone.

What’s even worse is that they often believe that their cage doesn’t work if their phone rings.

A Faraday cage dampens signals, but a phone operates on frequencies that allow it to work from within the device under certain circumstances.

That doesn’t mean the cage doesn’t work. It just means that a small signal got through it.

Your faraday cage need to be grounded

You also don’t need to have your cage grounded.

​A lot of people believe that grounding a Faraday cage is important, but it really just makes the cage a little better. It will work without being grounded.

If cages had to be grounded, a lot of RFID protectors wouldn’t work.

It’s a common misconception that all modern vehicles are going to become useless if an EMP attack happens.

A lot of cars will suffer some sort of damage, but a large number of cars will remain functional because they don’t utilize electronic parts for their most crucial systems.

If you want to fact check any of my claims or learn about other myths, you should check out this book.

Owning a Faraday cage is an important part of properly preparing, but it’s not the most important.

Most items you need to sufficiently prep are relatively primitive.

However, electronics are also important, and they make our lives easier.

Once you have all of your basics covered, I believe that a Faraday cage to house your most essential electronics is absolutely one of the things that should be at the top of your priority list. If you enjoyed the tutorial, I am truly grateful, and I hope that you’ll take the time to comment, and share it with your friends.