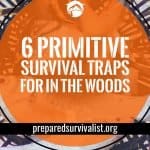 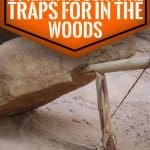 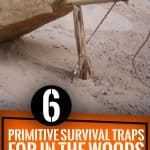 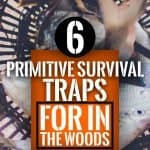 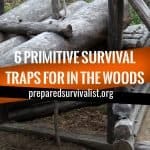 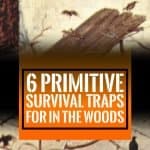 When you are out in the woods with limited supplies and in need of food you need to start hunting or scavenging for berries and nuts.

While gathering berries and nuts can help you out a lot, you will need to think about protein after a while. And with limited to no hunting supplies you have to rely on what’s around you.

The following 6 primitive survival traps have been around for ages and could bring in some well-needed protein when used properly, all by using the things around you. 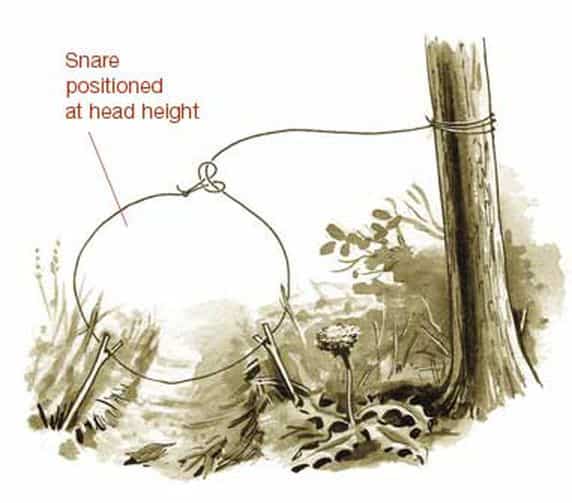 Small-game snares can be made from the interior strands of parachute cord, braided strands of sinew, or fishing line. Snares stout enough to secure game as large as deer need to be made of rawhide or parachute cord.

Ground Snare
Position the snare at head height and tie off the end to a tree, a stake in the ground, or a log that the animal can only drag a short distance as the noose tightens. Make snares from cord, fishing line, or wire if available.

Spring Snare
This set a trigger that snatches game into the air as it strains against the noose. It’s good for rabbits and game as large as deer.

Deadfalls that use logs or rocks to squash prey are typically baited, but they also work along trails or outside burrows when a passing animal or bird brushes against the trigger.

Spring Deadfall
One of the easiest traps to make and set, the spring deadfall depends upon the game worrying the bait. so it’s best used for carnivorous animals and rodents such as pack rats.

Employing fire-hardened spear points under tension, these can be deadly to predator and prey alike. Always set and approach an impaling trap cautiously from behind and use only in an emergency in remote areas, where another human or domestic animals are not going to blunder past.

Spring Spear Trap
This trip-wire set is effective for wild pigs, deer, or other game that regularly sticks to defined game trails. Make certain the horizontal thrust of the spear is at a level that will impale the body of the game sought.

This is an extremely dangerous trap; use it with caution.

Birds can be much easier to trap than mammals and should be among your first targets for a meal.

Ojibwa Bird Pole
Set this trap in a large clearing where birds will naturally seek it out as a landing place.

Step One: Sharpen both ends of a 6-foot pole and drill a small hole near one end. Drive the other end into the ground until it is secure.

Step Two: Cut a 6-inch-long stick that will loosely fit into the hole. Tie a rock to a thin cord and pass the cord through the hole in the pole, then make a slip noose that drapes over the perch.

Step Three: Tie an overhand knot in the cord in back of the slip noose and place the stick against the hole. Tension should hold it in position. When a bird flies down and perches, it will displace the stick. Then the rock will fall, and I will catch its feet as the loop quickly slides through the hole.

Fish swim next to banks at night or move from deep holes into shallow water to feed. They can often be directed into traps from which they are unlikely to escape.

Funnel Trap
Make the walls of the funnel trap with piled-up stones or tightly spaced sticks driven solidly into the river or lakebed. Close the entrance to the trap, roil the water, then either spear the fish or net them with a seine made by tying a shirt or other cloth between two stout poles.