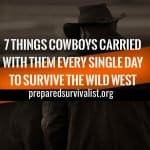 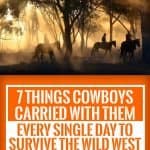 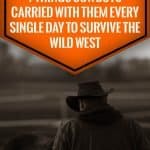 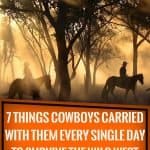 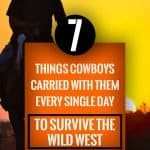 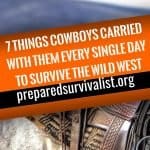 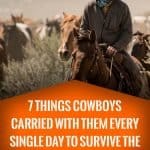 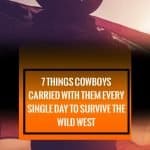 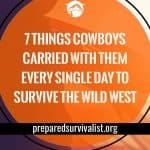 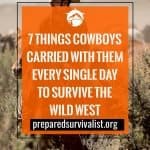 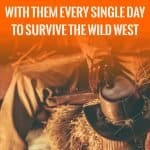 Life nowadays is pretty easy. We have a lot of technology to help us with our every whim. Life is at our fingertips.

But this wasn’t always the case. Every generation that came before us had it tougher than us. Some of the most hardened people were the cowboy that conquered the wild west.

Every day was a struggle to survive the element, wildlife, and even other people.

To survive in these harsh lands, the cowboys figured out what to bring with them every day to get an edge over others and the elements. With these tools, weapons, and equipment, they were ready to conquer the frontier.

The first thing that any cowboy had was a good knife. They didn’t have hatchets, machetes, wire saws and multi-tools like we carry in our bug-out bags today. Their only tool was a knife. So it was important to have a good one. This would usually be a mid-sized sheath knife, which was used for everything from cutting wood to skinning game.equipment,

Few had a honing stone, but the cowboys would often sharpen their knives on whatever stones they could find. A good chunk of granite or a piece of sandstone — it didn’t matter. Either one became a honing stone in turn.

Few cowboys roamed the West without a firearm. While they weren’t all laden down with guns, as we see in the movies, they pretty much all had something.

It might be a pistol, but in most cases it was a rifle. The pistol was more convenient, but the rifle was better for hunting game or fighting Indians.

Many of the cowboys had been soldiers in the Civil War. When they were discharged, they were allowed to take their guns with them. This meant that most had long guns, even if they didn’t have a pistol.

The canteen was an essential piece of equipment, especially in terrain where water was scarce. The typical canteen was about 2-1/2 quarts.

It would be covered with layers of scrap fabric, usually hand-sewn by the owner. By soaking that fabric in water, when he filled his canteen, the cowboy could keep his water cool.

The first thing that a cowboy did when he stopped at water was to fill his canteen, even before drinking. That way, if he had to leave in a hurry, he had a full canteen to take with him. It didn’t matter if he was only going to town, he’d stop at the water trough and fill his canteen, often dumping out the old water to replace it with fresh water.

Storms could come up suddenly in the West, especially for those who were in the mountains. Those could be dangerous for cowboys, drenching them and causing hypothermia.

They’d keep their rain slicker tied behind their saddle, either in a small blanket roll or alone, where it was ready at hand. That way, they could put it on, without having to dismount.

An actual blanket roll was much bigger than what we are used to seeing in the movies. It could be as much as a foot in diameter. That was too big to carry while riding the range.

On the trail, the cowboys would leave their blanket rolls in the chuck wagon, retrieving them at night. In the morning, they’d roll up their blankets once again, with their other possessions inside. At the home ranch, those possessions were in the bunkhouse.

But no matter what, a cowboy would have a couple of blankets tied behind their saddle. Call it the predecessor to the sleeping bag. Few would only want one blanket, as that wasn’t enough to deal with the fall and winter chill.

The bandana was a useful part of any cowboy’s kit. More than anything, it was used as a dust filter over the nose and mouth.

This was especially important when “riding drag” behind a herd. But the bandana served many other purposes, as well, including protecting the neck from the sun, being a handy washcloth and serving as an emergency bandage.

A tinder box was an essential piece of every cowboy’s kit. In it, he would store bits of tinder that he gathered along the trail, always ensuring that he had some with him.

He’d also keep a piece of flint in it, often sewn into a leather cover, thus improving his grip on it. If he had matches, they’d be in the tinder box, as well.

Many cowboys carried some line and a hook, so that they could catch fish when they camped by the water. This wasn’t a given, but it wasn’t uncommon, either. They’d dig up worms to use as bait, or find grubs, crickets and other insects.

For more cool survival info, check out Off the Grid News.